We regularly get asked, “what is barometric pressure?” So I decided to make a short blog post to answer this.

Please note that barometric pressure is sometimes also referred to as atmospheric pressure.

Very shortly, we can say that: Barometric pressure is the pressure on earth that is caused by the weight of the air above us.

That definition sounds pretty simple, but let’s anyhow take a deeper look into this subject…

To start with, what is pressure? Pressure is defined as force per area (p=F/A), which means that pressure is a certain amount of force affecting an area. The International SI defines the base unit for pressure as a Pascal, where 1 Pascal equals 1 Newton per square meter (N/m2).

In comparison, the common gauge pressure is referred to as current barometric/atmospheric pressure.

For more detailed information on the different pressure types, please have a look at the blog post Pressure calibration basics – Pressure types.

As mentioned, barometric pressure is the pressure caused by the weight of the air above us. The earth’s atmosphere above us contains air, and although it is relatively light, having that much of it, it starts to have some weight as gravity pulls the air molecules.

When I say “air,” it means the air around us, comprised of about 78% of nitrogen, 21% of oxygen, under 1 % argon and a small amount of other gases. The air gets thinner as we go higher because there are fewer molecules.

Approximately 75% of the atmosphere’s mass is below the altitude of about 11 km (6.8 miles, 36,000 feet) thick layer on earth’s surface. The border where atmosphere turns into outer space is commonly considered to be about 100 km (62 miles) above the earth’s surface.

We can illustrate the column of air above us, being pulled by gravity, causing barometric pressure with the picture below:

The nominal barometric pressure on earth is agreed to be 101.325 kPa absolute (1013.25 mbar absolute or 14.696 psi absolute) which means that there is about 1.03 kilogram-force per every square centimeter ( 14.7 pound force per every square inch) typically on earth’s surface caused by the weight of the air.
In practice, the barometric pressure very rarely is exactly that nominal value, as it is changing all the time and varies at different locations.

For weather example: during a rainy day, the barometric pressure is lower than it would be on a sunny day.

Actually, you can use a barometric pressure meter to measure your altitude, which is how airplanes can measure their height. The pressure drops as you go higher, it does not anyhow drop exactly linearly.

When you go all the way up to space, there is no pressure, and it is a perfect vacuum with no air molecules left.

The pictures below illustrates how barometric pressure changes when altitude changes. First with kPa versus meters, second with Psi versus feet: 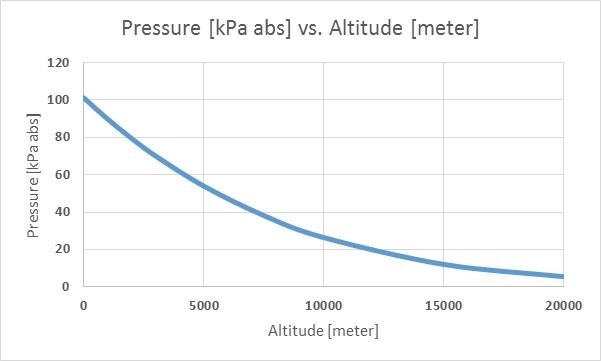 There are a few pressure units that have been created specifically to measure barometric pressure.

One of these units is standard atmosphere (atm) which equals 101325 Pascal. There is also a unit called technical atmosphere (at) which is not exactly the same as atm (1 at = 0.968 atm).

Torr is also used to measure barometric pressure, originally being equal to millimeter of mercury, but later it is defined as slightly different. Some SI units are also used such as hPa (hectopascal), kPa (kilo pascal) or mbar (millibar).

It is important to remember that we always talk about absolute pressure when we talk about barometric pressure.

We can easily feel the barometric pressure changing when we travel in an airplane. Even though there is pressure generated inside of the airplane, the pressure still drops as the plane goes higher. You can especially feel the growing pressure in your ears as the plane starts to land and comes to lower altitude. The change is so rapid that your ears don’t always settle fast enough.

Some people can feel the change in the barometric pressure in their body; experiencing headaches or aching in their joints.

Heikki Laurila is the Product Marketing Manager at Beamex. He started working for Beamex in 1988 and during his years at Beamex worked in production, service, calibration laboratory, as quality manager, product manager and product marketing manager. Heikki holds a bachelor's degree in science. Heikki's family consists of himself, his wife and their four children. In his free time, he enjoys playing the guitar.

LinkedIn
Back to top

What is operational excellence and how can calibration help achieve it?